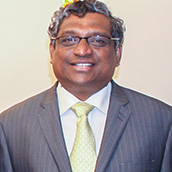 Dr Palitha Serasinghe born in Colombo, Sri Lanka in August 1956 and received primary and secondary education at Royal College, Colombo 7. He joined the University of Colombo, Institute of Indigenous Medicine in 1977 and graduated with a first class honours degree in Ayurvedic Medicine & Surgery in 1982. Then he became an Assistant Lecture and started his academic and research career at the university and also the clinical career at the Teaching Hospital of Ayurveda of the university.

He became the first Ayurvedic Doctor to receive a MONBUSHO scholarship to study in Japan. He spent five years in Japan since 1986 at Toyama Medical and Pharmaceutical University and awarded PhD in Medicine in 1991. During this period he has become a lover of Japan and Japanese Culture and fluent in Japanese language. He continued with collaborative and consultancy services with the universities, enterprises and pharmaceutical companies in Japan and has been with KaBUL group as the Consultant Ayurveda Physician for the last 20 years. On return to Sri Lanka in 1991 he continued to work at the university and as a Consultant Ayurveda physician at the Teaching hospital.  He was also heavily involved in research activities and also held the Head of the Department and Additional Director (Postgraduate & Research) posts. He was the first Sri Lankan Ayurvedic doctor to receive a Commonwealth Fellowship and joined the world famous university for medicine in the UK, King’s College London as a Visiting Academic Researcher to carry out his postdoctoral research in year 2000. Then he was invited to join the College of Ayurveda (UK) in 2002, since then he developed the curriculum and research as the Assistant Director and Principle Lecturer at the College. He was a key person in developing the joint programme with Middlesex University, London and later the Ayurveda programme was taken over by the University for Further Development of the programme. Dr. Serasinghe was offered the post of Programme Leader at the university and he continues to teach, research at the university. He is also an Ayurvedic Practitioner of the University Clinic. He is also the key person in establishing College of Ayurveda (UK) affiliated college in Japan and he continues to produce Ayurvedic therapists in Japan too. He has extensively travel around the world for teaching and for providing consultancy services such as in India, France, Germany, USA, Sweden, Latvia and Italy. He also has a long experience in training massage therapists and managing Ayurvedic Health centres in tourist hotels in Sri Lanka. His specialities are Panchakaram treatments, Diabetes, Metabolic disorders, chronic pain management, Marma therapy, Stress and emotional wellbeing, digestive problems etc.

You can find out more about which cookies we are using or switch them off in settings.

This website uses cookies so that we can provide you with the best user experience possible. Cookie information is stored in your browser and performs functions such as recognising you when you return to our website and helping our team to understand which sections of the website you find most interesting and useful.

Strictly Necessary Cookie should be enabled at all times so that we can save your preferences for cookie settings.

If you disable this cookie, we will not be able to save your preferences. This means that every time you visit this website you will need to enable or disable cookies again.